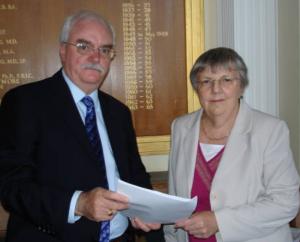 At this week’s meeting of the Council, the Executive Member for Adult Community Services, Cllr Rolson Davies was asked to update members on the Liberal Democrat campaign to tackle fuel poverty in the borough.

In his written response, Cllr Davies reported on a number of locally-run measures which will help pensioners and low-income households this winter.

He said: “I am delighted to say that Kingston Primary Care Trust, for which I am now a non-Executive board member, has recently been awarded a £36,000 grant towards its Fuel Poverty Alleviation Business Plan.

“This excellent initiative pays for specialist advisors to visit vulnerable households who find it particularly difficult to meet the costs of heating bills. As well as setting up energy efficiency measures in homes, they will be giving specialist advice on how to keep fuel bills low and tips on staying warm and safe this winter.

Cllr Davies continued: “Low-income residents who live in private sector housing often do not get the support they need from central Government to afford to keep their homes warm. This year, more sub-regional and local authority funding is being made available for the Council’s Coldbusters Grant Scheme which installs energy efficient heating and insulation measures in the local properties.”

“This Council is also taking action to tackle fuel poverty through our Energy Strategy, and will be running meetings with local health professionals, the social services and voluntary groups on how best to prepare for high fuel bills and low temperatures this winter.”

The Full Council question was asked by the Executive Member for Housing, Cllr Penny Shelton – whose Norbiton ward includes in the Cambridge Road estate. Following the update by Cllr Davies, she commented: “Despite our huge disappointment earlier this year when Tory and Labour MPs refused to back a Liberal Democrat sponsored bill which would have eradicated fuel poverty nationally - we are good progress locally to support pensioners and households who struggle with the costs of heating their homes.”