'Your Money, You Decide' event as South of the Borough celebrates 20 years of local decision making 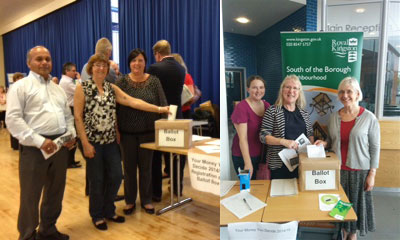 It is a well established fact that local Liberal Democrats are committed to the local communities they represent. And celebrating twenty years since they devolved local decision making to Neighbourhoods, the mantra to listen and involve residents is still very much alive in Lib Dem run South of the Borough Neighbourhood.

Cllr Rachel Reid, Chair of South of the Borough Neighbourhood explained how her Neighbourhood is involving residents in local community funding:

“With budgets under threat, it’s more important than ever before that we put our local communities at the heart of decision making. Through the Lib Dem run Neighbourhood, we set up a community scheme called ‘Your Money You Decide’ aimed at distributing £30,000 to community projects.”

Now in its 3rd successful year, the scheme allows any community or voluntary group, club, residents association or Council department to put forward an idea for funding up to £2,000. The 3 Wards that make up the Neighbourhood (Chessington South, Chessington North and Hook and Tolworth and Hook Rise) have all held a local meeting in the last week for residents to vote.

“It’s been brilliant – not only have we seen more residents than ever before turn up but they got to vote on projects they think will benefit the local community the most. This is the only scheme like it in the borough where total control of who gets what funding is down to the residents. The winning projects will now go to the next Neighbourhood meeting on 22 October for approval.”