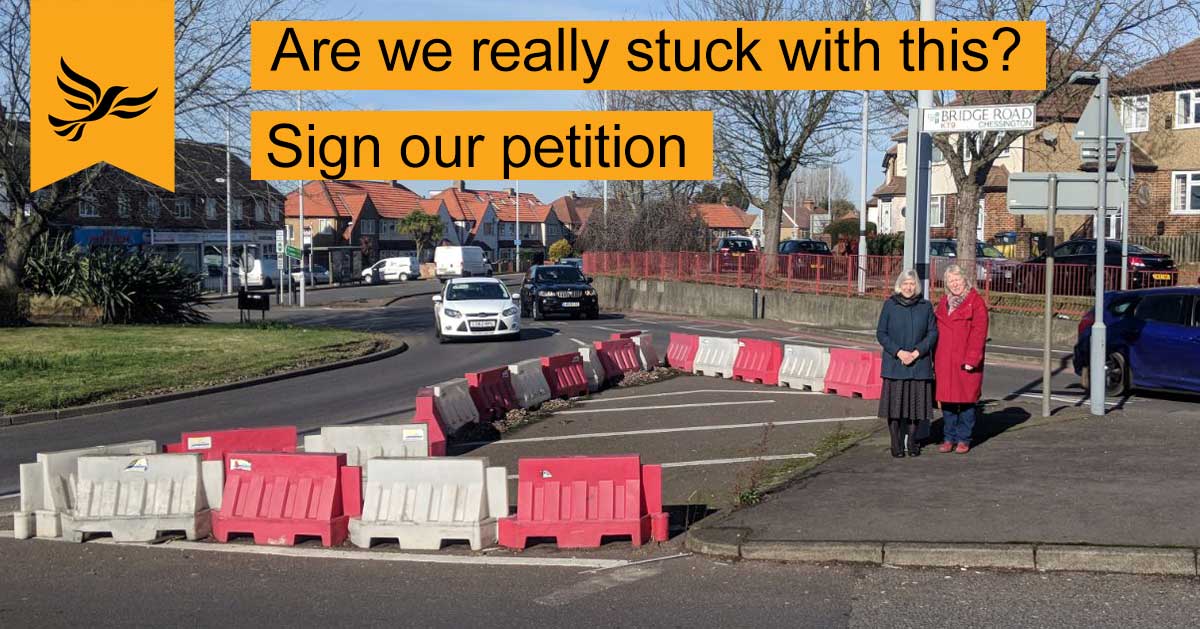 Chessington and Hook residents have been left outraged after it was revealed that the Conservative-run Kingston Council and Labour’s London Mayor have failed to make traffic congestion at the Bridge Road Roundabout a top priority.

Attempts by Transport for London to improve things have resulted in the current mish mash of bollards, queues, continuing late lane changing, hooting, road rage and the use of local roads as ‘rat runs’.

Recently Transport for London changed the priority for southbound traffic on the A243 Hook Road approaching Bridge Road roundabout, without any consultation, to the annoyance of many local residents.

Whilst not responsible for the mess your local Liberal Democrat Councillors have worked with residents, the police and Transport for London to try and improve things, and were hoping to be able to announce a new scheme with funding identified.

Councillors have now been advised that the latest Transport for London “business plan does not include funding for the major scheme at Bridge Road Roundabout.”

Once again Chessington and Hook have been overlooked for infrastructure improvements.

Local campaigner Tricia Bamford said, “Residents are fed up with ruling politicians at the Guildhall and City Hall neglecting Chessington’s traffic problems. Only your local Lib Dem councillors have been fighting this for you.

“We will not take this Con-Lab traffic failure lying down. We have asked Lib Dem MP Ed Davey and Lib Dem London Assembly Member, Caroline Pidgeon, to become involved and fight for this practical measure which could be implemented quickly to give local motorists and residents some relief now.”

Your local Lib Dem councillors are outraged to learn that the Bridge Rd Roundabout improvement scheme has been cancelled. Once again Chessington and Hook have been overlooked and ignored.

Add your name to our petition today:

I support the Liberal Democrat campaign to reinstate funding for an improvement scheme at Bridge Road Roundabout.