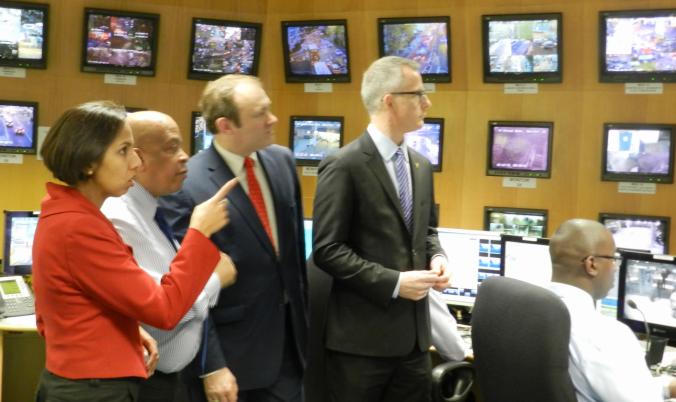 Kingston Liberal Democrats have launched a campaign to boost Kingston Town Centre police numbers with a dedicated town centre police team. The idea is the brainchild of former Met police chief, Brian Paddick, who is running for Mayor.

On a visit to Kingston’s town centre CCTV control room Mr Paddick launched his campaign alongside local Lib Dem Munira Wilson, who is campaigning to become the Borough’s representative on the Greater London Assembly, and Edward Davey MP.

He claims that the fight against crime locally is being hindered by Boris Johnson and the local Conservative GLA member, Tony Arbour, who have “done nothing” for areas like Kingston, because they have failed to deal with the Met’s bloated central HQ budget.

Munira Wilson said, “The priority for London’s Mayor and GLA should surely be to boost the number of front line police officers in places like Kingston town centre – by slashing HQ bureaucracy. Liberal Democrats have proposed efficiency savings of nearly £9 million – such as halving the Mayor’s press officers, reducing by a third the use of consultants and abolishing chauffeurs for senior Met officers, unless needed for security. That could pay for a lot of bobbies on the beat.”

1. Extra town centre police, with a focus on alcohol-fueled crime.

2. Back Lib Dem councillors’ decision to make it harder for new pubs and
clubs to get licences in Kingston town centre.

3. Strengthen the existing successful partnership between the Council,
residents, police and local businesses.

5. Make the rest of the Borough safer - especially the neighbourhoods around
Kingston’s town centre like Grove, Canbury and Tudor - as the new Town
Centre Police Team reduces the need for other police to be diverted.