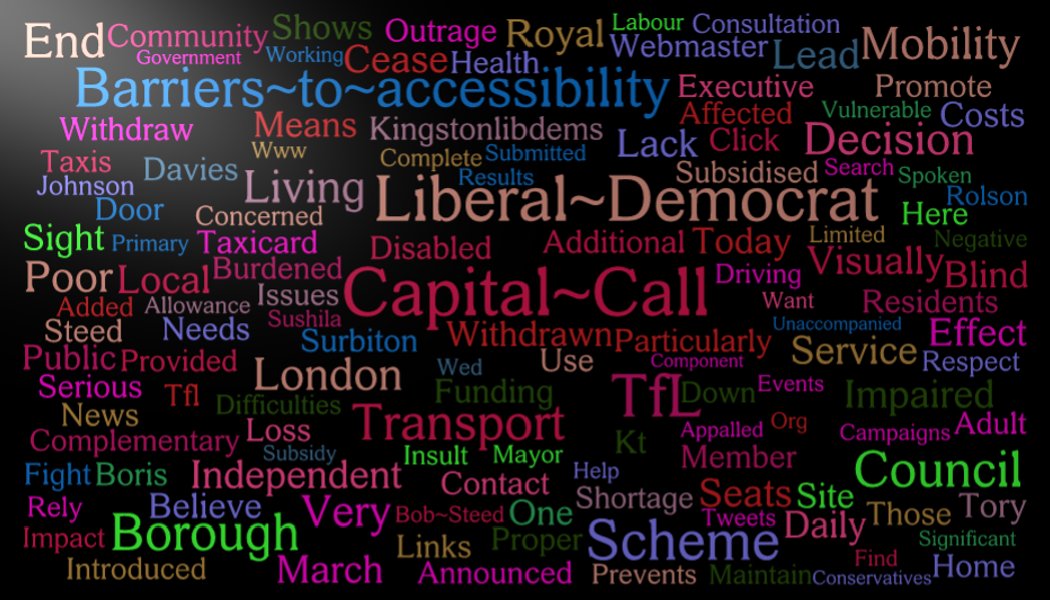 Capital Call was a complementary service to Taxicard introduced in 2004 by TfL which provided subsidised door-to-door transport for people with mobility issues living in London boroughs where there is a shortage of London taxis. In January 2009 it was announced that Kingston’s Capital Call scheme will cease, with effect from 31 March 2009.

We are particularly concerned for people living in the borough who are visually impaired. Sight loss prevents people from driving and can also lead to serious difficulties for using public transport unaccompanied. The end of Capital Call scheme will have a serious negative impact on the mobility of Kingston’s blind and visually impaired residents.

Kingston's Liberal Democrat Council will fight the Conservative Mayor of London, Boris Johnson, on this decision.

Transport for London have responded to pressure from Kingston’s Liberal Democrat Councillors and local campaigners to delay the cancellation of the Capital Call service in Kingston from April to June 'at least', to give time for further discussion and consultation.

London Mayor Boris Johnson wants to cut the Capital Call service, which offers subsidised door-to-door transport for people in Kingston who have mobility problems. We only have a few weeks left to stop him.

Last year 270 people in Kingston registered with the scheme, and used it an average of nine times each. I know that many partially-sighted people in particular have found it very helpful, and it offers a cheaper and more reliable service than black cabs.

Earlier this year, the Mayor decided to cut this service as part of his budget plans. He planned, without any consultation with users, to axe the service on 31 March.

Thankfully, the Talking Newspaper, Transport for All and the Kingston Centre for Independent Living all lobbied against this unfair move. Boris had to back down, and we now until June to make our views heard.

That is why I have set up a petition on the council’s website for everyone who wants to save this important service. If you want to support Capital Call, please look at http://epetition.kingston.public-i.tv/view/capitalcall and add you name.

This year Boris thought he could cut services for people with mobility issues without complaint. We need to send him a clear message that he cannot, and hopefully he will think twice about attacking other groups next year.