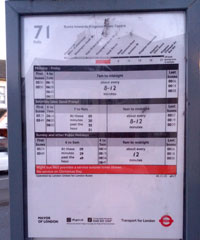 Local councillor Tricia Bamford has slammed a change in the timetable for the 71 bus route, which is under the Mayor’s control.

Cllr Bamford spotted the change when travelling to work on Tuesday of this week and was able to take photographs of the new and old timetables as they were being taken down.

London buses have so far claimed that there has been no change to the timetable but looking closely there is a definite loss of service before 8am on Sundays and Bank holidays. Not only that but there is a potential extra 4 minutes to wait for every bus between 8am and 7pm on weekdays.