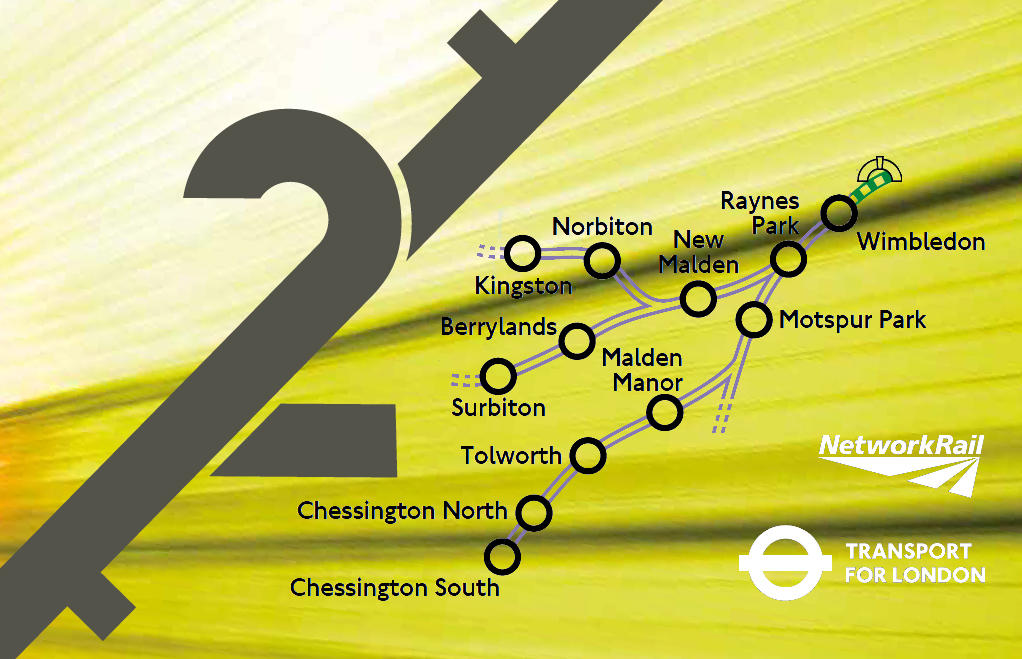 By 2018, over fifty years after joining Greater London, Kingston will be the only London borough in which TfL has no tube or rail stations or tram stops. In this context, any proposed TfL investment in Kingston rail is not only welcome; it is long overdue.

Kingston Borough Lib Dems (KBLD) welcome the enhanced capacity and frequencies that Crossrail 2 (CR2) would bring to the South West Main Line (SWML) and the Chessington, Hampton Court and Kingston branch lines. Forecast population growth within our borough adds an urgency to redress the capacity and frequency shortcomings of existing rail services on the SWML and SW Outer London branch lines.

KBLD reject the view that future SWML peak hour capacity shortfalls can be solved via new ticket pricing structures that seek to deter travel. It is clear that major capital investment is needed to provide significant increases in capacity to the SWML and branch lines.

Our welcome in principle to Crossrail 2 is tempered by reservations about some elements of the published plan and the non-publication of meaningful analysis or modelling of the likely impact on established commuter patterns.

KBLD are disappointed that CR2 has chosen not to publish detailed figures on current commuting patterns as part of the current Crossrail 2 consultation. This makes it difficult to accurately gauge the extent to which CR2 would impact on existing commutes, and the numbers who might face negative outcomes in the form of more difficult or longer journeys.

Anecdotal evidence, when paired with data in TfL’s 2011 Central London Rail Termini report, suggests that a majority of commuters from some, if not all, Kingston borough stations commute to final destinations in the Waterloo, Holborn, City and Canary Wharf areas.

Commuters to these destinations currently use Waterloo to travel to final destinations. CR2 would remove some Waterloo services and replace them with services to North/North East London via Victoria. Passengers at stations exclusively served by CR2 would take new routes to travel to the Waterloo, Holborn, City and Canary Wharf areas. This would necessitate changing off CR2 onto other lines.

For CR2 to be a fit for purpose solution for SW London, it is critical that sufficient transfer capacity exists at key stations to allow rapid interchange for onward journeys to the Waterloo, Holborn, City and Canary Wharf areas. Failure to provide adequate capacity both in terms of (i) interchange station capacity, and (ii) available space on onward trains would result in longer peak hour journeys for many Kingston residents.

At public consultations, CR2 staff have highlighted the key role of Tottenham Court Road (TCR) interchange with Crossrail 1 (CR1) in providing access to Holborn, City and Canary Wharf.
KBLD seek clarity on the ability of TCR to handle transfer volumes to these critical destinations. There is a view from some commentators that CR1 will quickly become full at peak hours, with relatively few eastbound passengers transferring off CR1 until after TCR.

With thirty trains an hour arriving from SW London, ie one every two minutes, any shortfall in transfer capacity could necessitate temporary non-stopping of CR2 trains at TCR on station congestion and safety grounds. In such a scenario, KBLD seek
(i) firm assurances that sufficient transfer capacity will exist at Tottenham Court Road
(ii) clarity on just how the large volume of affected passengers would be expected to travel to their final destinations.

If CR2 gets transfer capacity wrong at TCR, it would have serious implications for Outer SW London commuters. We need confidence that CR2 has got this bit right.

At Balham/Tooting, there is a clear transfer capacity mismatch between the large CR2 mainline trains and the smaller, already crowded, tube trains, both trains running at similar frequencies. In public presentations, CR2 staff have explained that they don’t foresee significant numbers of previous South West Trains commuters transferring from CR2 to the Northern Line at Balham / Tooting. KBLD seek further detail from CR2 to explain what underpins their analysis – just why wouldn’t significant numbers seek to access the City via the Northern Line?

If there isn’t sufficient or robust transfer capacity at TCR, we can foresee the possibility of many Waterloo, Holborn, City and Canary Wharf bound passengers reverting to commuting via Waterloo. With fewer inner suburban trains to Waterloo, we seek assurances that there would be sufficient capacity, and that Kingston commuters wouldn’t have to endure longer journeys as a result of transfer delays.

1.4 A Green Park station is worthy of investigation

The advent of CR1 could potentially result in some spare capacity on the Jubilee Line. The creation of a new Green Park CR2 station to interchange with the Jubilee Line is worthy of serious investigation. If feasible, it could deliver significant benefits for SW London commuters.

Alternative access to the City (via London Bridge) and to Canary Wharf would increase resilience and give greater connectivity, lessening the critical dependence on TCR as an interchange for the City & Canary Wharf.

KBLD would welcome an indication as to whether the need to change trains would cause an increase in journey times to Waterloo for passengers at stations exclusively served by CR2. Higher frequencies, eg an increase from two trains to four trains per hour may mitigate or even offset longer journey times caused by the need to change trains for Waterloo. It is our view that residents are more likely to support CR2 if they are provided with as much information as possible on the likely effects.

3. Retention of London Terminals only tickets 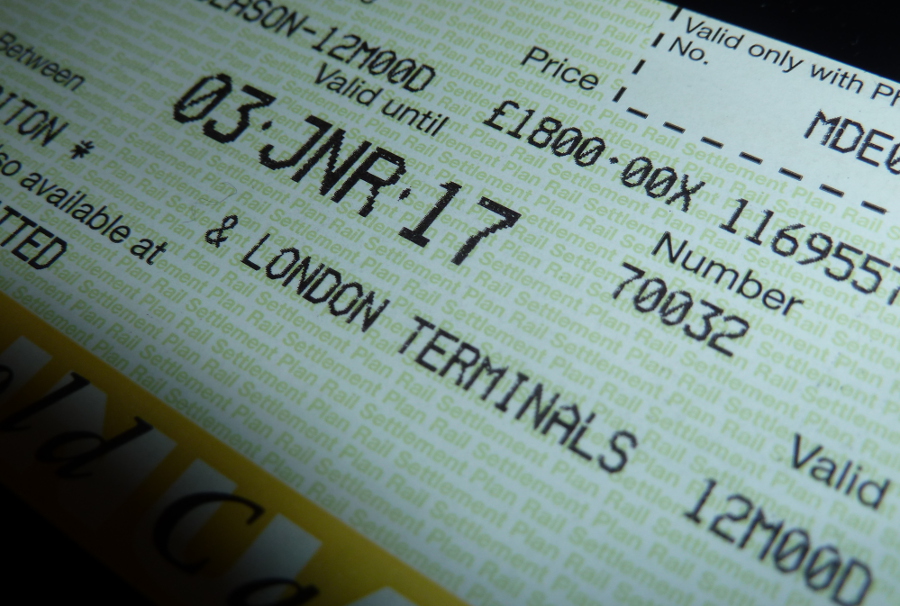 A significant number of Kingston commuters currently purchase London Terminals rail-only fares, eg Chessington South to Waterloo only. These fares are significantly cheaper than TfL’s equivalent zonal fares as they don’t cover travel on TfL’s tube or bus network. If any Waterloo bound passenger served by a CR2 station had to pay more for a longer journey caused by having to change trains, they would seriously question what benefit CR2 brings them.

KBLD hold a strong view that these London Terminals rail-only fares must continue if CR2 is to take over stations previously served by the SWT franchise. Failure to do so would result in yet another disproportionate fare rise for a significant number of Outer London commuters.

Greater use of the Slow Lines from Surbiton inwards. If some of the trains which currently switch from the Slow Line to the Fast Line at Surbiton were instead to remain on the Slow Line, then their paths could be used by longer distance services. Analysis suggests that this could potentially release two paths in the high-peak hour.

However, the disbenefits would be
a) longer journey times to London Waterloo for those whose trains remain on the Slow Line, and
b) a performance risk with two additional trains per hour using the Slow Line." 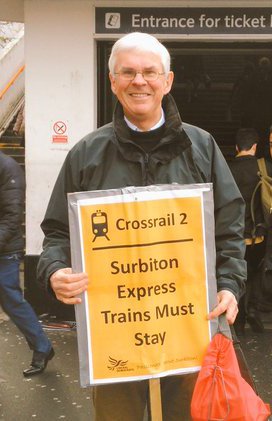 The proposal acknowledges that trains that currently use the slow track to serve Esher, Hersham, Walton, Weybridge, Byfleet, West Byfleet and Surbiton before switching to the fast track for Waterloo would have longer journey times as a result of being kept on the slow track.

When questioned by Kingston Lib Dems, CR2 representatives were unable to guarantee that Network Rail wouldn’t take advantage of the CR2 service pattern change to invoke the above proposal.

KBLD are utterly opposed to this proposal. There is no technical requirement for Surbiton’s current fast (non-stopping) trains to be rerouted onto slow tracks to facilitate CR2. To sacrifice fast trains would result in significantly longer journey times to Waterloo for the many inner suburban rail users of Esher, Hersham, Walton, Weybridge, Byfleet, West Byfleet and Surbiton. Only to benefit the much smaller number of long distance commuters.

Many commuters on the Hampton Court branch use Surbiton to catch fast trains to Waterloo. The Waterloo express services are a key and long established factor in people choosing to live in the Outer SW London and Surrey areas. Their removal would have a large and deeply unpopular impact on many, and would reduce the residential desirability of the area as a whole.

CR2 on it’s own is not enough to meet Kingston’s public transport needs.

The London Mayor’s London 2050 report emphasises that the projected population growth of Outer London boroughs would generate transport needs that can not be met using congested road networks. Accordingly, KBLD seek proposals from TfL on how they would seek to integrate CR2 investment with any future tram or express busway schemes.

KBLD warmly welcome the outline commitment to develop all CR2 stations to be fully accessible, however feel that this should be undertaken now, not waiting until CR2 becomes operational.

Surbiton Station has severe overcrowding in peak hours which leads to major safety concerns. These need addressing before CR2 is operational. KBLD seek an assurance that much needed capacity/safety improvements to the Grade 2 listed Surbiton Station building would be carried out with the utmost sensitivity to the building’s distinctive Modernist style.

Wimbledon is the nearest Underground station to Kingston Borough and is used by many Kingston passengers to change onto the District Line. CR2 construction works at Wimbledon are mooted to last as long as 8 to 10 years and KBLD are concerned about any potential impact on access to the District Line.

KBLD request that CR2 provide evidence on whether an alternative deep tunnel under
Wimbledon / Stephen Colebourne’s Swirl scheme could be less disruptive, could be delivered more quickly, at cheaper cost than the shallow tunnel currently proposed. KBLD request evidence on any benefits/disbenefits that an alternative deep tunnel may have on journey times from Kingston borough.

The immense scale and cost of Crossrail 2 presents a very real risk that it might not be delivered in the proposed timescale, or even at all. As previously stated, the 2009 RUS report clearly identified the real and pressing need to address forthcoming capacity gaps on the SWML.

Should CR2 not be deliverable in time, Network Rail’s 2015 Wessex Route Study has proposed an alternative additional rail scheme from Surbiton to Waterloo.

KBLD are concerned about the feasibility of constructing an additional surface rail track alongside a live working railway without causing severe and lengthy disruption to existing commuters.

KBLD are puzzled by the omission of any express tunnel option from the shortlist of CR2 alternative schemes in Network Rail’s 2015 Wessex Route Study.

KBLD request that serious consideration be given to evaluating the feasibility of a Surbiton to Waterloo express tunnel (ie with few/none underground stations) as a CR2 alternative. We understand that in tunnelled railway schemes, it is typically the underground stations, not the tunnelling itself, that accounts for most of the construction costs and adverse public opinion to such schemes. KBLD seek CR2 to establish if an express tunnel could be less disruptive, lower risk than a new surface track, and the cost benefit differentials between them. 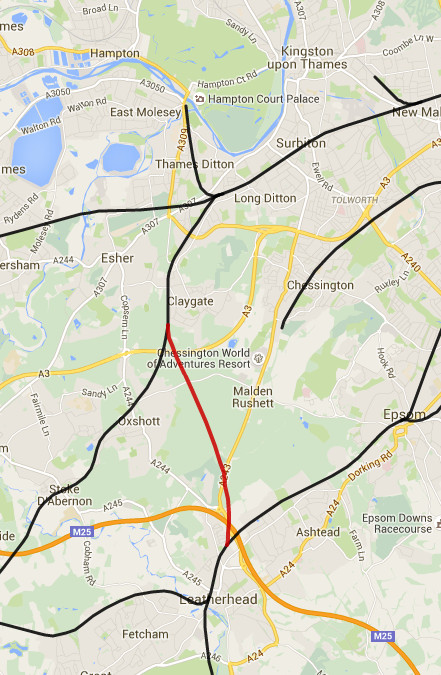 Should any extension of CR2 be considered, KBLD request written evaluation of diverting CR2 at Surbiton to travel to Leatherhead/Dorking.

This would be achieved by constructing a new railway line across open countryside from north of Leatherhead to south of Claygate.

This route, by linking to “nearly Kingston” at Surbiton, would offer greater benefit to Kingston town than running CR2 all the way to Leatherhead via Chessington South.

This would address Kingston town’s historically poor rail links to its southern hinterland. An embryonic tram system for Kingston could then be explored using the line between Surbiton and Thames Ditton.

Thank you to everyone who supported Ed Davey, Sarah Olney and the Liberal Democrats.