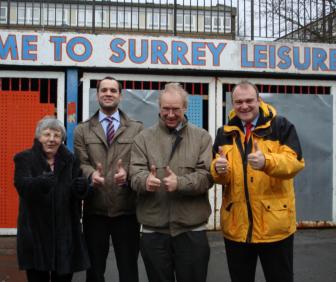 A bid to create a new community sports and social centre on Norbiton's Cambridge Road Estate was approved last week by the Council's Executive members, who received vocal support from neighbourhood residents’ associations and ward councillors.

Members of a local business ‘24/7 Security’ offered a £300,000+ investment for the opportunity to oversee the refurbishment of an unused former underground car park into a specialist sports centre with boxing, martial arts and weight training facilities as well as space for Bingo games and community events.

“I am delighted to support and approve this exceptional offer to transform a derelict space on the Norbiton Council Estate into a community sports centre and social club.”

Since 2006, the Council has consulted with residents about the future use of the underground site and has received overwhelming community interest in the provision of sports and social facilities for the area.

However, approval of the lease had been deferred from December 1st due to negative campaigns from Labour and Conservative members of the Council. At the Executive meeting on Tuesday 12th January representatives from 24/7 Security who will be running project, gave a public presentation in response to these campaigns. They explained in detail their strong business plan and desire to “give something back to local kids and residents on the estate”. Use of the facilities will be open to local people at discounted, affordable rates.

At the meeting Conservatives endorsed the proposals but Cllr Steve Mama continued to obstruct the process with concerns about the impact of traffic and unsubstantiated fears about the philanthropic project being “too good to be true”.

Liberal Democrat Cllr Shelton explained: “We should be prepared to approve the lease of this empty property at a peppercorn rent because of the huge financial investment which these local businessmen are offering for the site, for the pure benefit of the local community.

She added: “I welcome a project with such good intentions. It is clear to me that a local sports centre and social club will make an invaluable contribution to well-being, health and community cohesion in the local area.

“I am disappointed by recent campaigns by opposition councillors to deny local people such a wonderful opportunity on the grounds of plain negativity, unfounded fear and suspicion.”

The Executive Members approved the lease with the condition that detailed planning and implementation of the proposals for the new facility are carried out in full consultation with residents and their representatives.