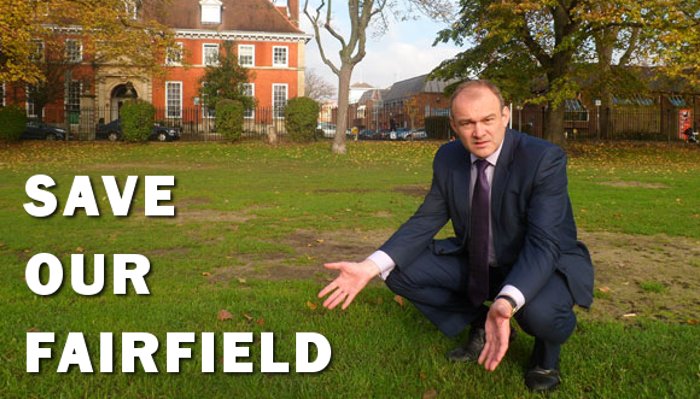 Local Lib Dem MP Ed Davey has launched a petition to stop the Tory-run Council from paving over a section of the Fairfield opposite Kingston Library. The proposals are set out as part of a Council commissioned development brief for the “Eden Quarter”.

Plans drafted by Kingston Council would see the historic Monday Market moved to a new paved area on the Fairfield. The current site of the Monday Market, on the Kingfisher car park, would be dug up, sold off and replaced with developments as high as 12 storeys.

The tower block would be higher than any other building in close proximity to the Cattle Market, overshadowing the Fairfield and would see a drastic transformation to the local skyline.

Ed Davey commented “There are precious few green spaces in central Kingston. It is outrageous that the Tory Council are prepared to even contemplate paving over some of the much loved Fairfield. Once one part is lost, how long before they come up with plans to take over more parts of the Fairfield?”

“Your local Lib Dem FOCUS team will campaign to enhance the Fairfield, together with the play area at the Kingfisher, as an improved open space for Grove residents.” added local Councillor Chrissie Hitchcock.

I oppose Kingston Council's plans to pave over part of the Fairfield in order to move the Monday Market onto the Fairfield.

Petition now closed - This petition has now been submitted to Kingston Council. Many thanks to the 700+ who signed it.