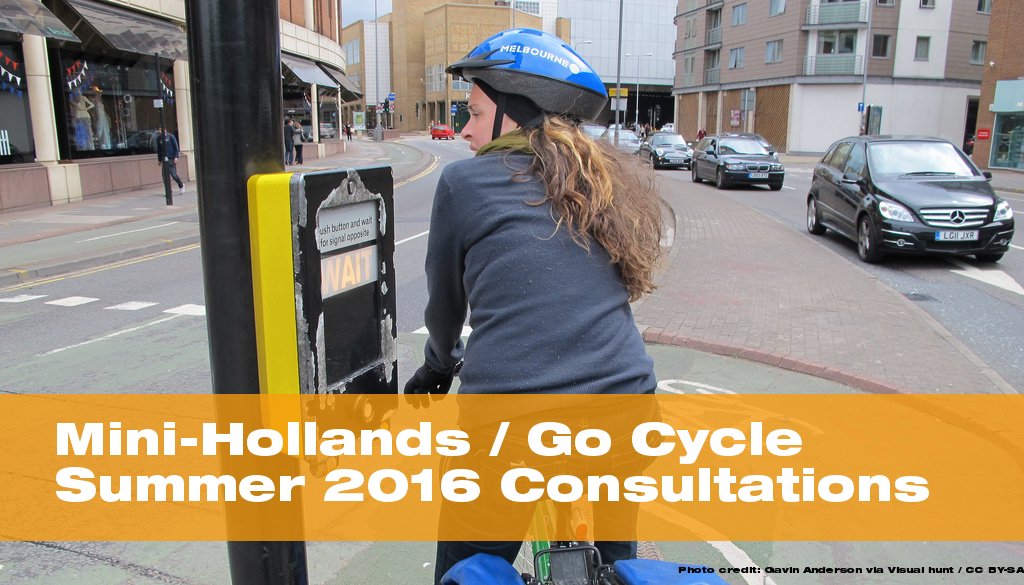 Four ‘Go Cycle’ schemes have been consulted on at the height of the summer. As Liz Green has pointed out, in Sun, Sea, Sand and…Consultations, summer holidays are not the best for maximum public involvement. Unfortunately, the Conservatives chose to ignore a petition submitted to Council to extend the consultation period.
The aim of mini Hollands1, is to ‘transform local cycling facilities and encourage people to take to two wheels’. The former Mayor of London, Boris Johnson, awarded Kingston over £30m in 2014 to make changes to Kingston’s road network that would help people who wanted to cycle, but who were too nervous about using the roads to do so.

We’ve heard a lot about the growth Kingston will experience – Kevin Davis, the Conservative leader of the council, says Kingston’s population in set to increase by 10% by 20202. In making the cycling funding available, TfL was acknowledging that Kingston's roads cannot continue to absorb the increases in car usage that such growth would otherwise entail.

It therefore makes sense to encourage people to use other modes of transport. There are other benefits if people do cycle, in terms of air quality and the benefits of the exercise on their own health, as articulated in the former Mayor’s Vision for Cycling3.

So, in order to ease congestion on the roads, to improve air quality, to encourage people to take exercise that will benefit their health, the ‘Go Cycle’ programme has to work. ‘Therein lies the rub…’ Since taking over the council in 2014, the Conservatives have shifted the emphasis from ‘facilities to …encourage people to cycle’ to facilities which ‘seek to be all things to all men’.

Let me illustrate how it’s possible to achieve this by looking at the first part of the Portsmouth Road mini Hollands scheme, which in order to provide protected space for cyclists has reduced the carriageway width. At the same time, the centre line has been removed: this is known to calm traffic4, as drivers tend to become more attentive.

Local people in the ‘River Roads’, a Conservative colleague has admitted, now say they find it more pleasant to cross the road and walk along to the Queen’s Promenade because the traffic is calmer. They’re that much further away from the traffic when they’re on the pavement too.

It’s absolutely right that we don’t want to introduce more congestion – particularly since that would have a negative impact on air quality. Whilst motorists and buses go at a steadier pace on Portsmouth Road, there’s no sign that overall journeys take any longer.

Yet the initial scheme from the Conservatives shied away from taking that little bit of carriageway from the lanes until Liberal Democrats and Kingston Cycling Campaign members pointed out that the scheme as proposed would not make cycling any safer. So it would be unlikely to achieve its objective of encouraging more people to cycle!

While work continues on the Portsmouth Road, where protected space for cyclists will continue to the High Street, consultations were put out on the four other schemes. There’s a lot of misunderstandings about the Portsmouth Road scheme – for example, some people are under the impression that that’s it, whereas it will actually be double the length eventually - and I fear this may have had a negative impact on the responses to the four new schemes.

Click on images below for my thoughts on each scheme