Stand Up for the Chessington Greenbelt - sign the petition 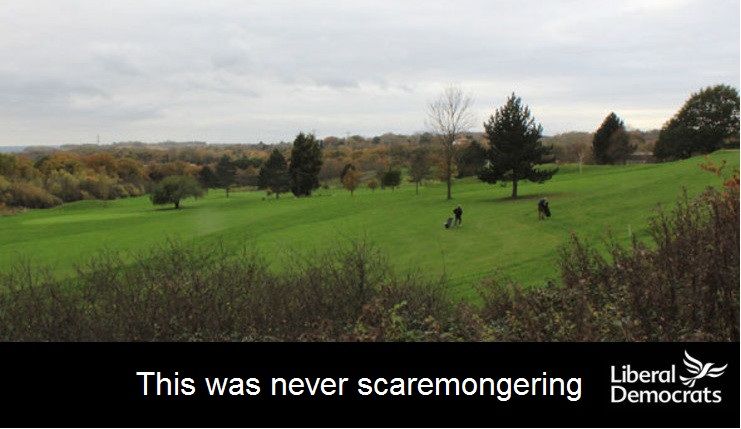 Over 1000 people signed the petition below when we launched it last year. At the time Conservatives denounced our campaign as ‘scaremongering’ despite the written evidence. Recent events confirm we were right all along to warn local people.

Chessington Golf Course in Garrison Lane is closing soon, and rumours have spread across the Neighbourhood about proposed redevelopment on the site. No-one has submitted a formal planning application to the Council – yet – but we do know that a developer has come forward with a proposal for housing which could also incorporate a swimming pool and a football pitch.

The Golf Club is currently designated as Green Belt. The Liberal Democrat councillors in the Chessington area have already met with the Conservative Leader of the Council to make our position clear: we must protect the Green Belt.

The local schools and roads are already under huge pressure, and thousands of new homes will just add to the problems.

On top of that, the air quality in and around the A243 is poor.

We are also worried about the danger of flooding. The Golf Club is on a hillside and the land at the bottom of the site, by Chalky Lane, is already very swampy.

All of this would only be made much worse if a football stadium and leisure facilities were added to the proposed housing, bringing in thousands more visitors.

We want the developers to reveal their plans. We want them to hold a public consultation in the Chessington area before they submit plans to the Council, so that the local residents who will be directly affected can have their say.

So there is more need than ever to sign the petition, if you have not done so already.

Plans backed by the Conservative Deputy Mayor for Housing at City Hall propose to build up to 70,000 homes in Chessington and create a new London ‘suburb’ across the green belt.

The plans were drawn up by London First, a London pressure group made up of big businesses, including large property firms like Westfield & Berkley Homes and include proposals for new powers for the Mayor to impose developments on local communities.

The plans would see the end of large swathes of Chessington Green Belt and necessitate a whole new infrastructure of shops, supermarkets and transport that could swamp the Borough with more traffic.

The Deputy Mayor for Housing has backed the plans. To find out more read the full Home Truths report and the earlier Funding Crossrail 2 report from London First, which detail the plans.

I call upon the Mayor of London to oppose plans to build on our Green Belt and ensure that housing developments continue to be decided in consultation with local residents by the Royal Borough of Kingston.