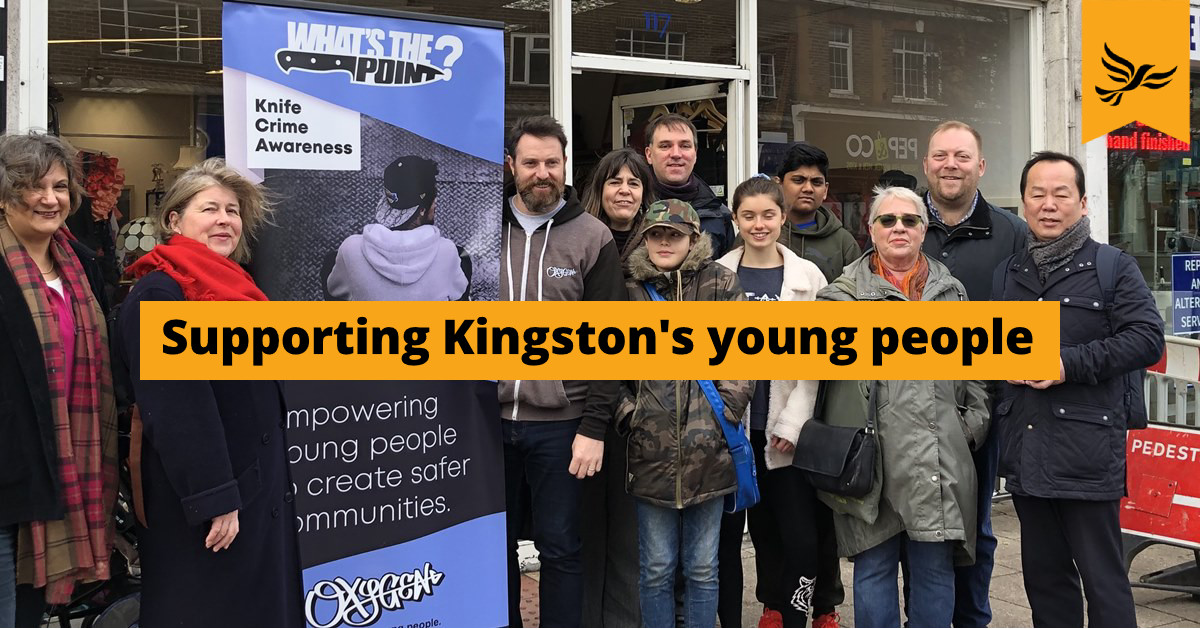 Figures from the ONS (Office for National Statistics) show that crimes involving knives or sharp instruments rose by 16% to 40,147 in England and Wales for the year to March 2018*.

Sadly, it’s an issue which is impacting on Kingston. Recently, a young resident was stabbed to death in an incident on the Cambridge Road Estate, and just across the river, a 57 year-old Media Executive was stabbed whilst out on a Sunday morning walk with his dog near Kew Gardens.

The Met commissioner, Cressida Dick, said in December that whilst the tide was turning against knife and gun offences, she admitted it would take more time to tackle the issues.

With this in mind, your local Lib Dem Councillors have decided to donate over £3,500 from our annual ward funding to Oxygen, a local youth charity that operates across Kingston, to help with prevention and other projects for local young people.

The charity seeks to tackle the root causes of knife crime through its ‘Whats The Point’ community outreach programme. This aims to show young people locally and across London the inherent dangers of carrying knifes and gang culture.

Recently, it has opened a shop in New Malden High Street (pictured above) to generate funds for their work and provide opportunities for local people to volunteer.

Liberal Democrat Councillor, Mark Durrant (pictured with fellow Lib Dem Councillors and volunteers at the Oxygen shop on New Malden High Street), said “All Councillors are deeply concerned about the spread of knife crime across London and although it is still very rare for incidents involving knives to take place in Kingston, one is too many.”

“Oxygen is a fantastic New Malden based charity that has run a Knife Crime Prevention programme across the borough for the last five years. We are delighted to be donating our ward funding to this charity to help support the work they do with young people.”

John Trend, Leader of the Oxygen project, said “We are grateful to the local New Malden Councillors for recognising the important work we do to prevent knife crime and support we give to local young people.”

Oxygen also helps vulnerable local families with ‘Room 1’ at Coombe Boys school. The aim of Room 1 is to give all young people a safe place after school where they can: study, relax and play. Room 1 is targeted at young people who are eligible for free school meals. They also engage young people with local mentoring programmes which help boost self-confidence and help them to make positive life choices.