Hogsmill River hit twice in a week by pollution 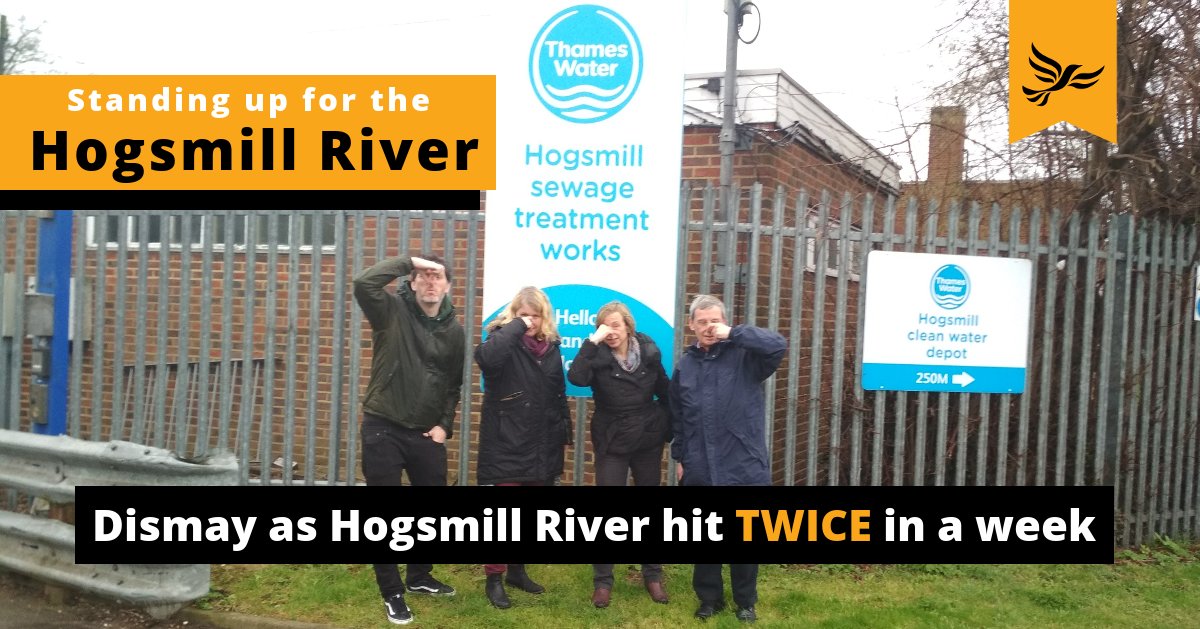 The Hogsmill River is a globally rare chalkstream river and many species that inhabit it are sensitive to changes in water quality. Despite this, the Hogsmill River was recently hit by two different sewage pollution incidents in the space of just four days.

Kingston Lib Dems have reacted with alarm and we are seeking answers and assurances from Thames Water who were responsible for both incidents. We are additionally pressing the Environment Agency to take effective action against Thames Water to ensure robust, permanent solutions to protect and enhance the Hogsmill as it flows through our area.

The first pollution incident occurred on the afternoon of Wednesday 24th January 2018 and involved yet another release of sewage and storm effluent into the Hogsmill from “Combined sewer overflows”.

When the Hogsmill River's catchment area is hit by very heavy rain, as happened on this occasion, the sewers can't cope and sewage starts backing up.

Thames Water overflow tanks have been built along the course of the Hogsmill to temporarily contain any such backup, but when these tanks themselves get full, the sewage is released into the Hogsmill River via overflow pipes. This is what happened that afternoon.

On the afternoon of Wednesday 24th January 2018, this happened...

The video shows sewage being discharged into the #Hogsmill from one of the storm tank sites.

Read more about why this happens and what we are doing about it here: https://t.co/0DzBWJzGsK #pollution #sewage pic.twitter.com/97sZddomLv

In theory, such releases should be rare, typically once or twice a year, and are done with permission. The South East Rivers Trust, however, reports claims that these sewage overflows into the Hogsmill are occurring increasingly frequently - up to fourteen times per year. This increase comes as the Hogsmill valley is coming under increasing development pressures, as more surfaces are covered with impermeable roads, driveways and pavements.

The increasing frequency of discharges from the Hogsmill Storm Tanks along the length of the Hogsmill present a threat to water quality and chalkstream species thoughout the downstream course of the river.

For years, local Liberal Democrats have repeatedly warned Conservative-run Kingston Council of the dangers of their headlong rush into overdevelopment without real infrastructure improvements.

While attention has focused on the Conservatives’ slow delivery of infrastructure such as health, school places and public transport, we must not forget about our basic infrastructure.

Treating the Hogsmill as an open sewer is not acceptable today, never mind in future. The need for improvement is critical after November 2017, when Conservative-run Kingston Council signed up to “Direction of Travel” plans to further densify and intensify development in the borough.

We’ve also been made aware of an operational incident on Saturday 27th January 2018,  during which sewage sludge from the Hogsmill Sewage Treatment Works was released into the Hogsmill river.

Kingston Lib Dems have taken an intense interest in how Thames Water manages Hogsmill Sewage Treatment Works over recent years, visiting the works several times. We are concerned and disappointed that an operational incident has led to this incident.

The news of these spills coincides with major efforts to improve and restore both the Hogsmill River and the Berrylands Nature reserve.

"The community here in Berrylands are working to do our bit, we want to make sure that Thames Water are too".

Fantastic turnout on Saturday morning at our nature reserve in #Berrylands despite poor weather with 19 volunteers preparing the site for upcoming river restoration works. Good to see our local MP for #Surbtion & #Kingston @EdwardJDavey. Do join us & be part of this project! pic.twitter.com/3LhyjKcrCn

Kingston Lib Dems want to see consistency in Thames Water’s approach - it’s not enough to help in the restoration of the Hogsmill habitat if Thames Water’s own inadequate infrastructure or working practices are damaging the habitat at the same time. That's why we're referring these incidents to the Environment Agency as well as raising them with Thames Water themselves.