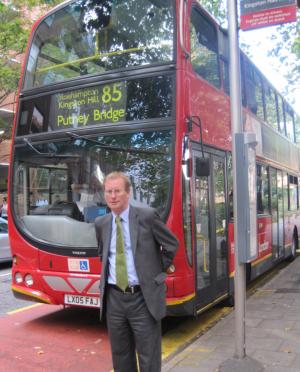 In the week that a raft of unpopular transport decisions have been announced by the Conservative Mayor of London, Kingston’s Executive Member for Transport has welcomed the news that a Liberal Democrat motion for ‘one hour bus ticket’ scheme in the capital has been overwhelmingly supported by the London Assembly.

On Wednesday, the Chair of the London Assembly’s Transport Committee presented a petition of over 2000 signatures to the London Mayor, which included the Liberal Democrat members of Kingston Council. It called for passengers who use more than one bus during a 60-minute period should not to be charged more than a single fare on their Oyster Card.

Cross-party members of the London Assembly then voted in favour of a motion demanding that Transport for London investigate the feasibility and cost implications of the Liberal Democrat sponsored-proposal.

Cllr Bob Steed, Lead Member for Transport in Kingston said: “The Conservative Mayor needs to start listening to the demands for ‘fare fairness’ from bus passengers. Unlike residents of many other European capital cities, Londoners who need to change bus routes on their regular journeys are penalised with multiple fare charges.

“If adopted, a time-limited bus ticket would be the first sensible transport policy decision Boris Johnson has make in seventeen months of mayoralty. He has systematically increased public transport costs at an inflation-busting rate, fallen far short on his grandiose election promises to improve cycling routes in the capital, and notably failed to invest in the infrastructure needed in Greater London boroughs such as Kingston.”

“Members on the London Assembly have also revealed that hidden deep down in the small print of the Mayor’s recent transport strategy is a pledge to cut £150million worth of bus subsidies over nine years. This will be an absolute disaster for the future of bus services in London.”

Councillor Liz Green, who the Deputy Leader of Kingston’s Liberal Democrat administration and a regular bus-passenger said: “The Conservative Mayor shows contempt for Londoners who regularly ride buses. Just this week he admitted his intention to hike single bus fares up 20% adding hundreds of pounds to the annual commuting costs for Kingston residents who for of environmental reasons or financial restraints, decide to use public transport rather than cars.

She added: “A one hour bus ticket would be the first step towards fare fairness for bus passengers in Kingston.”