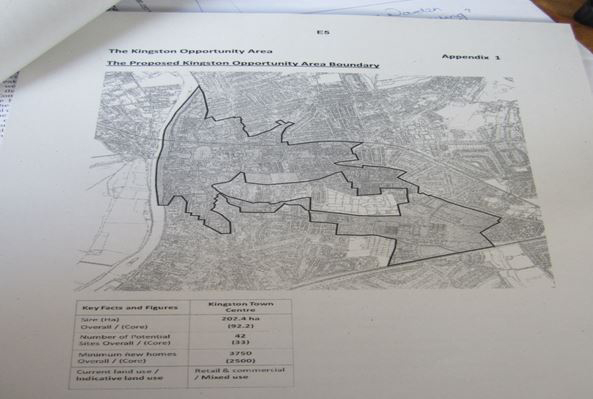 Liberal Democrats were left reeling at the last meeting of Infrastructure, Projects and Contracts Committee when they found themselves at the end of a tirade of insults from Conservative Councillors for asking some serious questions about the proposed Kingston Opportunity Area.

“The Conservative Lead Member, Councillor David Cunningham, accused Lib Dems of scare mongering, raising red herrings and trying to wreck the work done with City Hall simply because we raised concerns about the boundary areas for the proposed Kingston Opportunity Area and also for asking to be part of the Board which will oversee the next steps.”
Criticising the report and the above map in the report, Lib Dem Councillor Bill Brisbane said:

“This map will alarm and create uncertainty for residents. What is happening on the map? – It looks like a wider area than necessary with a hole in the middle with no explanation. Drawing boundaries is contentious and difficult. Residents need to know what the purpose of the Opportunity Area is and what will come forward”

Councillor Bill Brisbane who represents residents in the proposed boundary area moved an amendment which was not accepted by the ruling Conservatives. He continued:

“I don’t know how this report was brought forward but I don’t think it’s very impressive. The purpose of the committee is to agree boundaries and yet the map provided is totally inadequate. This was bounced on us at such short notice and with no reference or consultation with councillors at Kingston Neighbourhood committee which is solely affected by this boundary. Members need to be better briefed beforehand.”

Councillor Malcolm Self asked for a member of the Opposition to be on the Board to oversee the next steps but found himself at the end of an outburst from Councillor Cunningham. Councillor Self said:

“I think it’s quite reasonable to ask for an elected Opposition member to be on the Strategic Growth Board but was told by Councillor Cunningham that due to our performance tonight he would not put a Member of the Opposition on the Board.”