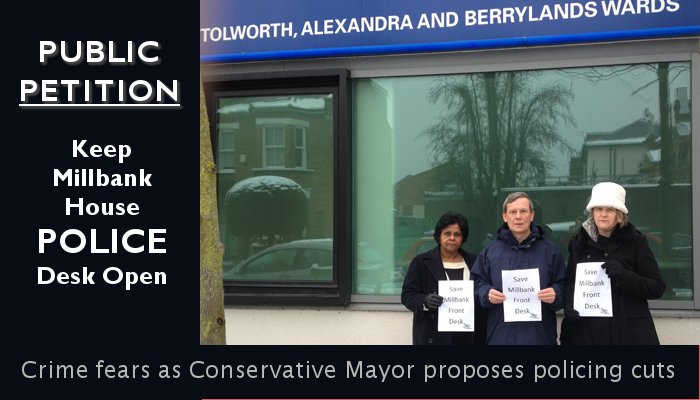 Cllr Sushila Abraham and the Lib Dem team have slammed the proposals by the Conservative Mayor of London to close the police front desk at Millbank House and to cut the number of dedicated officers on the beat in Berrylands.

The Liberal Democrats understand the need to make savings in the police budget but believe taking police off the beat is not the answer.

Sushila Abraham said: “Berrylands is one of the safest wards in London. The cuts proposed by the Mayor of London put this record and reputation at risk.

I know from personal experience the impact which the closure of local police desks can have on the surrounding area; the area surrounding my business on the Ewell Road experienced a marked
increase in crime levels when our local police station was moved."

There was an excellent response to the Lib Dem petition. Sushila Abraham has now written to the Conservative Mayor of London with the names of all the people who had signed it.

I am writing to you enclosing the petition which I have been running in Berrylands against the plans to close the police front desk at Millbank House and the proposed cuts to the safer neighbourhood teams across Kingston.

My objection to the closing of the front desk is as follows. I have direct experience of the impact which a closing of a police station or front desk has on the level of crime in the surrounding area; its mere presence acts as a deterrent. Additionally, I am concerned about the impact which some of the alternative proposals will have on the level of crime reporting. For example, I would worry about erecting ‘pop up’ shops in coffee shops or supermarkets and expecting people to report serious crimes such as assault or rape which already have low rates of reporting. I fear that having to report such crimes in a public place will deter people who might already be nervous about doing so.

I do hope you will take my comments and the views of local residents into account when making these plans.

Latest update: Sushila Abraham has now received a reply from City Hall on 24th April. You can view it here.