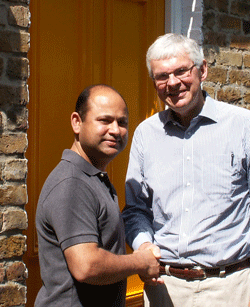 Liberal Democrat Councillor for Surbiton Hill ward, Umesh Parekh (left in picture), has stepped down from Kingston Council to take up an exciting new job with the major environmental campaigning charity Friends of the Earth.

A requirement of Umesh’s new role is that he cannot stand for, or be elected to, a local Council.

Local residents have a chance to comment on the planning application for the redevelopment of the Surbiton Hospital site.

The proposals, which have been brought forward after lengthy discussions with the community, include a healthcare building and a new primary school.

You can view all the details of the application on the Council's website.

The deadline for comments is Friday 14th January. (Remember that any comments you make will be made public).

Cllr Dennis Doe wrote into your paper, March 19th ‘No five year delay on primary school plan.’ He mentions two sites which he claims are of sufficient size and could be built as quickly as new primary schools on Surbiton Hospital site. Well, simply he is wrong.

No extension of Clayhill Halls of Residence

Kingston Lib Dems launch a petition against the expansion of Kingston University's Clayhill Halls of Residence.

Petition Closed - Thanks for your support

At this month’s meeting of Executive, Conservative councillor Nick Kilby suggested that the Council should pursue a property developer’s bid to buy Raven’s Ait, which would have seen the small Thames island transformed with a new-build for 20 luxury apartments and a large restaurant.

In the context of considerable security costs to safeguard the Council-owned asset from damage from squatters and thieves, Executive Members were considering proposed bids for sale or lease of the Council-owned land.

Surbiton Sea Scout Group have enjoyed the use of Raven’s Ait for 25 over years. Conditions have been attached to the island’s sale or lease; future occupiers should accommodate the Sea Scouts on Wednesday and Friday afternoons.

“Raven’s Ait is clearly a fantastic asset for this borough. The Council wants to support its continued use by community groups, and I am delighted that the Sea Scouts, who help young people training to sail and canoe, should be accommodated by whoever next takes over the island.” 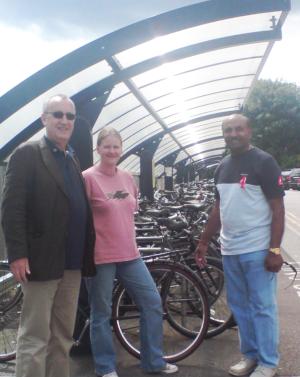 The provision for bicycle parking at Surbiton train station is the second best in the whole of London according to a recent survey by the London Evening Standard.

The Liberal Democrat administration of Kingston Council put cycle parking at the front and rear of Surbiton station back in 2005 and introduced the innovative two-tier system of bike parking. The Transport for London, South West Trains and Kingston Council scheme subsequently won the award for having ‘the best cycle parking at a rail station’ in the 2005 London Transport Awards.