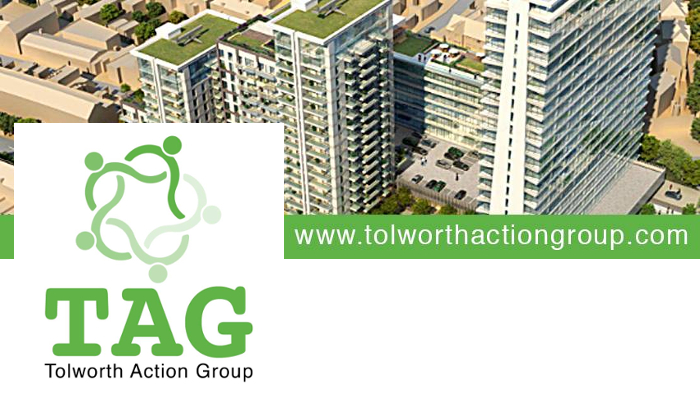 There is a dark cloud looming over Tolworth in the form of the current developments proposed for the local area. The gathering storm of tower blocks and urbanisation of a suburban area is outrageous and wrong.

TAG is a newly formed concerned group of residents and residents associations and is backed by all Tolworth and Hook Rise Ward, and Alexandra Ward cross-party local Councillors who oppose overdevelopment.

To this end, TAG has taken legal advice to start a Judicial Review into the current Tolworth Tower plans.

"TAG believes that we live in a suburban community and that all development proposals should conform to that brief. We do not want poor quality, overpopulated tower blocks. We want good quality, low density housing with appropriate green spaces and parking. This should be built in measured stages so that the incoming population can be incorporated properly and any ensuing problems ironed out.

"To this end we have taken legal advice and as a result of this, we are looking for support to fund a judicial review of the current proposal for Tolworth Towers. We have gathered together with all residents associations and local councillors to spearhead the fight."

"The battle against overdevelopment in Tolworth is nearly as old as me! The Tolworth Tower plans shockingly passed by Kingston Council were another example of over-dense, inappropriate plans for Tolworth. So many local people have also expressed their disbelief.

"When TAG approached me asking for my support, I was more than happy to see that Tolworth residents still have fight left in them - I immediately lent them my backing."

"As soon as TAG approached me and showed the determination to tackle this head on, I immediately gave my full support to this resident-led Councillor-supported action Group. I will personally be donating £50 to the cause aimed at righting this wrong."