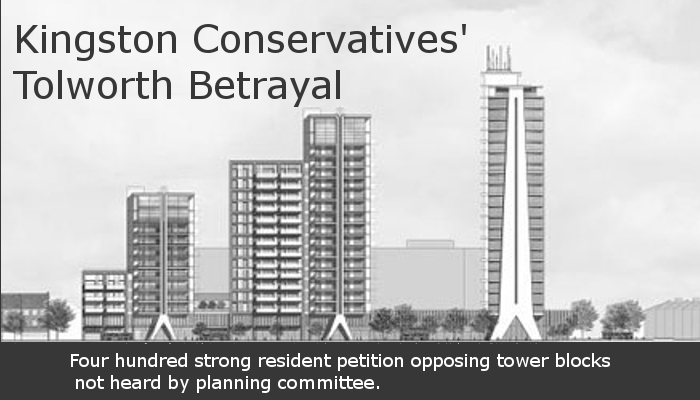 Tory councillors have forced through the planning application which will see four further towers alongside Tolworth Tower on the Broadway. The towers will be 5, 12, 15 and 19 storeys high.

Local residents told them they were concerned about even more traffic, pressure on local schools and doctors, lack of affordable homes for local people and deteriorating air quality. But every single Tory councillor voted for the controversial development.

Councillors were told the public supported the plans.

The committee members were not told of a 400 signature petition opposing the scheme, apparently collected by local Tory Councillor Richard Hudson.

"I can’t believe the Tories ignored residents. Liberal Democrat Councillors voted against the plans because of

But sadly the Tories put their developer friends above local people.


We will now take the fight to Mayor of London who has the power to overturn this bad decision."

Read the reaction of the Leader of the Opposition, Cllr Liz Green.

To: Boris Johnson, Mayor of London

I request that you use your powers to call in the planning application 15/16356 and overturn the permit decision of Kingston Council.