Top Lib Dems flood in to support Rupert and Kamala 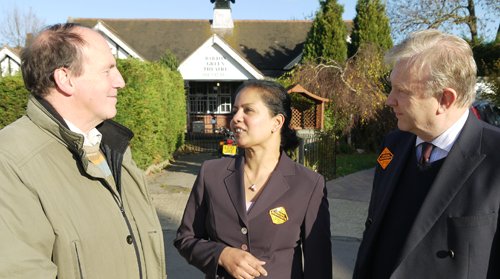 On Sunday Lib Dem Deputy Leader, Simon Hughes MP, returned to his New Malden roots to campaign with Rupert and Kamala. Simon’s father and aunt used to live in Coombe Vale ward and Simon has been a regular visitor to the area.

“I was impressed to see two good candidates who are campaigning hard to make this area great again. It is clear from the state of the local streets that this area has not been best served in recent years, but Kamala and Rupert are a breath of fresh air. The reception on the doorstep for them is very positive,” Simon commented.

Rupert Nichol said, “I am delighted to see so much support for our local campaign. It was a pleasure to welcome Lib Dem Mayoral candidate Brian Paddick and London Assembly Lib Dem Leader Caroline Pigeon on Friday to highlight the need for improved public transport and better policing to keep our area safe after Boris cut the Safer Neighbourhood Teams.”

On Saturday Kamala Kugan was out campaigning with Health Minister, Paul Burstow MP for Sutton. “We’ve had a very positive response across the ward” said Kamala, “it’s been great to have Paul and lots of other senior colleagues lending their support.”

Kingston and Surbiton MP, Edward Davey, and Business Secretary, Dr Vice Cable MP from Twickenham have also given support this weekend and we have also had lots of help from Baroness Susan Kramer (past Lib Dem MP for Richmond Park) and from Baroness Sarah Ludford, Lib Dem MEP for London.