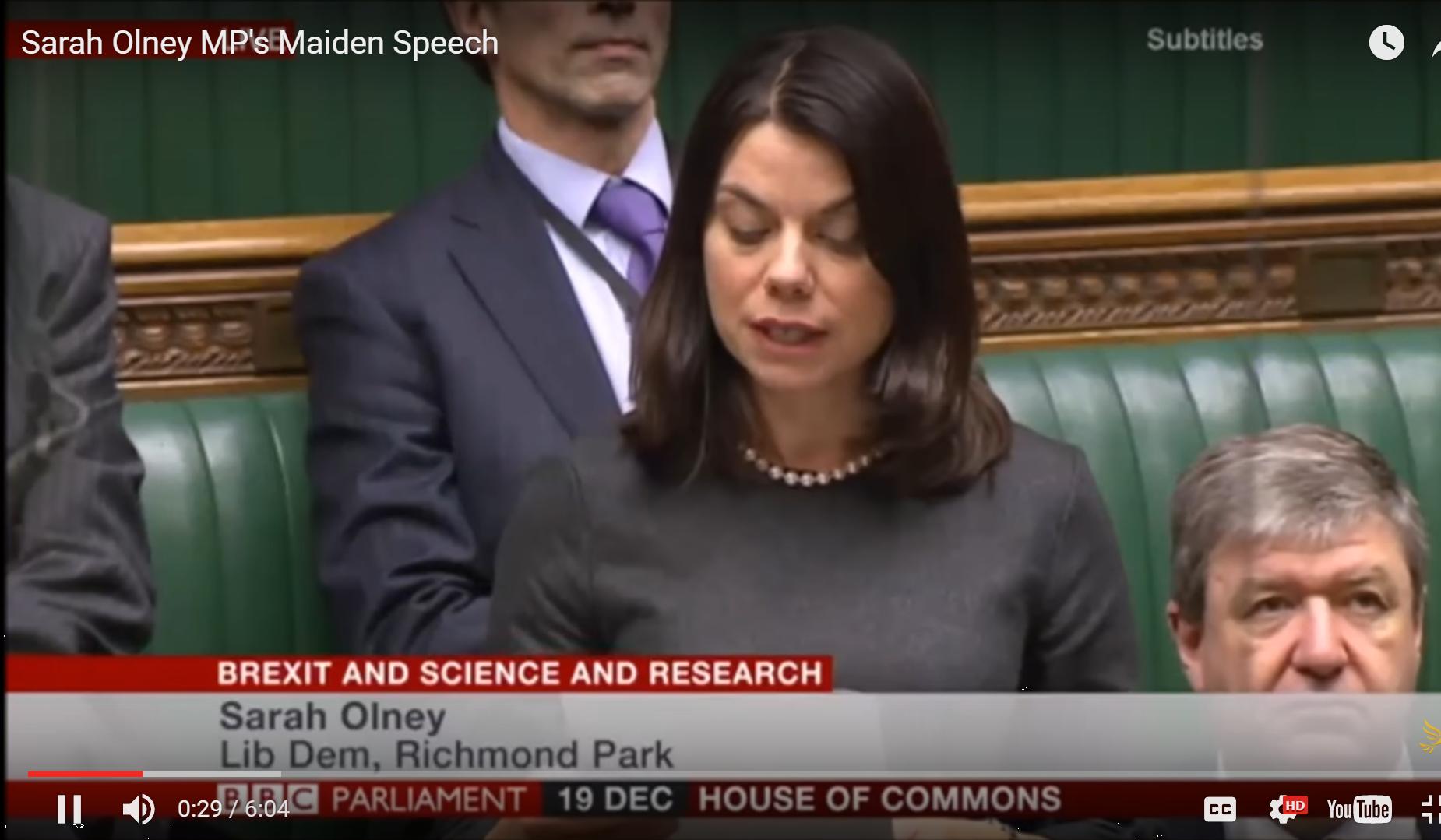 Last night, Sarah Olney made her maiden speech in Parliament. You can watch it here.

Thank you, Madam Deputy Speaker, for calling me and giving me the opportunity to make my maiden speech today. It is a privilege and an honour to be standing here as the elected representative of Richmond Park, which brings with it a great responsibility that I shall use my best endeavours to fulfil.

I wish to pay tribute to my predecessor, Mr Zac Goldsmith, and thank him for his excellent constituency work on behalf of my fellow residents of Richmond Park over the past six years. In particular, we owe him our unending thanks for his efforts to block plans to build a third runway at Heathrow. The fact that he felt he could no longer be a part of a Conservative party that approved expansion demonstrates beyond all question his passion and commitment to the cause. It is a cause that I take up willingly on behalf of constituents who know that the claimed economic benefits of expansion will not compensate for the impacts of the increased noise and air pollution that millions will suffer if expansion goes ahead. I would also like to acknowledge the contribution of his predecessor, my fellow Liberal Democrat Susan Kramer, who fought the third runway for so many years. I look forward to working with parliamentary colleagues from all parties as we continue to make the case against expansion.​

It is a particular honour to be elected to represent Richmond Park, not just because it is my home and the place where I have been bringing up my family, but because of its great history and wonderful environment. Richmond takes its name from the Earl of Richmond, later Henry VII, who built his great palace in what was then called Sheen in 1500. Henry VII was the king who, having won a great victory against an unpopular king at the battle of Bosworth, came to power at a time when the country was catastrophically divided by the Wars of the Roses and urgently needed leadership to bring it back to harmony and prosperity.

Britain today is a divided country, split asunder by the decision taken in June this year to leave the European Union, and it is hard at this moment to see how these divisions can be healed. It is my belief that Parliament can be a positive force in bringing together the two sides of the Brexit debate. If the arguments can be aired openly, questions answered thoughtfully and votes taken on all the significant points of difference, then each British citizen will see that their point of view is being represented, whichever way they voted in June. There can be no question of people being silenced or sneered at for their opinion on Britain’s future within the European Union.

I make no secret of the fact that my own opinion is that we should remain. I believe that the will of the people is the same today as it has always been: to live in a prosperous and stable society. Our responsibilities as parliamentarians are the same as they have always been: to act in the best interests of our country. We have a duty to future generations to bequeath them a society in which they can thrive. Evidence and instinct both suggest that collaboration with our nearest neighbours benefit our trade, our education, our environment, our security and our individual wellbeing. Such benefits should not be carelessly thrown aside without a careful, sober and detailed examination of what the consequences will be.

The impact of Brexit will be wide ranging and not just financial. In my constituency, our hospital relies on the hard work and dedication of migrants from Europe. Many of my constituents work in financial services which rely on our privileged position inside Europe. Many of our businesses import from and export to the European Union, and rely on the tariff-free access and the harmonised standards of the single market for their success. Many families - hard-working, community spirited, warm, friendly people - have come to our little corner of London from across Europe and made it their home.

In the area of science and research, there is no doubt that the UK has benefited hugely from its membership of the European Union. I had the enormous privilege, before being elected as MP, to work for a world-renowned science and research organisation, so I have had some experience of the discussions and concerns that the prospect of Brexit has raised among the science community. The obvious impact will be the lack of access to research funding provided by the EU. There is no question but that the UK is currently a net beneficiary of this: between 2007 and 2013, we paid in €5 billion to the Horizon 2020 fund and received €8 billion back in grant funding.

But the impacts go deeper. One of the biggest concerns is that by being shut out of access to EU funding, UK scientists will also be excluded from cross-EU collaborative ​projects and lose access to specialist laboratory facilities across Europe. This will result in a loss of opportunities for UK scientists to participate at the very forefront of research. UK laboratories and research facilities currently benefit from the ability of scientists from across the EU to come and work here. If Brexit inhibits the ability of EU nationals to move to the UK, UK-based science and research will suffer. The success of the UK’s science and technology industries will be critical to our future economy, and we should be doing all we can to nurture and promote them.

I did not aspire to be a politician. I did not ever expect to be standing here addressing hon. and right hon. Members as I am today, but I felt compelled by the events of the last few months—not just the referendum result, but the Government response in the aftermath and the divided society that has resulted—to put myself forward.

I wish to close by thanking my fellow MPs from all sides of the House for the warm welcome they have extended to me since my election. Unexpected though my election was, I am enormously excited by the opportunity I have been given and look forward to playing a full part in the business of this House.