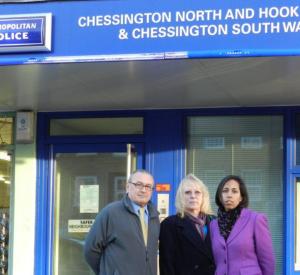 Local campaigner, Munira Wilson has uncovered alarming evidence showing many of our local Safer Neighbourhood Teams (SNTs) are being cut by stealth.

The Mayor of London has quietly put in place a recruitment freeze for all Police Community Support Officer (PCSO) vacancies across London, leaving gaps in many of our local SNTs. This shocking news follows recent cuts to SNT sergeants, with many wards in Kingston now having to share a sergeant. SNTs were set up so that every council ward had one sergeant, two PCs and three PCSOs.

Local councillors were told by the Borough Commander that the freeze was put in place last year and the Metropolitan Police careers website states, “Unfortunately the MPS is not currently recruiting PCSOs”.

An analysis of the 16 wards in the Royal Borough of Kingston shows six wards missing one PCSO, with St Mark’s and Surbiton Hill wards missing two out of three PCSOs. These two wards are already having to share their sergeant, as are eight other wards.

South West London Conservative Assembly Member, Tony Arbour, whose job it is to hold the Mayor to account for our area, has remained silent on the issue.

Munira Wilson said, “I am very worried about these cuts to local policing and I am campaigning strongly against them. The Lib Dems at City Hall have committed to protecting frontline policing by cutting spending on consultants, PR and police perks. There is no need for these damaging stealth cuts by the Conservatives. They are punishing Kingston for being one of the safest boroughs in London, thanks to excellent work by the local Lib Dem council, in partnership with the police and businesses.

“I am particularly concerned that these figures will continue to rise as new PCs are only being recruited from the PCSO and Special Constable pools, and no doubt we will see further cuts once Olympics cash dries up.”

Munira has launched a petition to protect our Safer Neighbourhood Teams on her website: www.munira.org.uk .